As someone very keen to see Genealogy & Family History Stack Exchange graduate from its Beta phase sooner rather than later, I keep a close eye on its Area 51 statistics which today are: 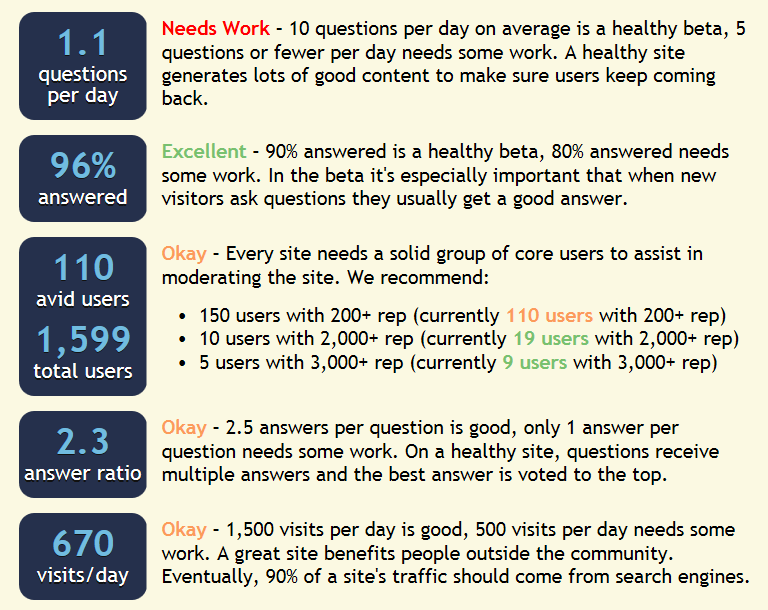 In order to graduate, my understanding is that getting each measure into the green is our target, but not necessarily a requirement. For example, GIS was a sea of green when it launched but Bicycles still had one red and one amber measure.

From our statistics it is clear that:

I have seen opinions here in Meta that advertising G&FH SE more would be the panacea to our problems, and I suspect that it would certainly go quite some way towards it. However, many/most of us do not have large genealogical networks (or reputations) to facititate free advertising, so I would like to explore several other ways that every one of us can attack the low questions per day problem:

Some of the above also apply to answers and general encouragement of new users, but I see our immediate problem as being a low volume of questions.

Is the above a sensible approach to the "low questions per day" problem?

One reason I think graduating is important is so that we can get a post here like Network Engineering SE earned recently. Getting a "designed for us" site branding would be great reward for the hard work put in by so many users over the past few years.

Further reassurance that we are here to stay has been posted in this Meta SE Q&A: Graduation, site closure, and a clearer outlook on the health of SE sites

Several members of the Stack Exchange community team, myself included have reviewed the state of things here on Genealogy. Here are our takeaways.

Sure, question activity isn't always make or break for graduation, but it needs to be in a significantly higher range (7-10x) for graduation to be on the table at all.

Looking past the numbers

Having enough high quality Q&A is table stakes for graduation, but we look at factors which are harder to measure too. Our sites are community-run, so we often ask, "Is there a community there?" One way we answer this is by watching meta activity. We look for meta to be used as a place for policy discussions and debates, and there hasn’t been much of that here.

Additionally, it's been hard to find willing moderators. We've had two mods for awhile now, and while PolyGeo and Jan Murphy have been doing an exemplary job of holding down the fort, we strongly prefer that all sites have at least three moderators. So far, when I've reached out to users about becoming a pro tem, no one has stepped up.

That said, we want Genealogy to keep being part of Stack Exchange

In the history of the SE network, we've closed very few sites (not counting those shut down in private beta, because that's a different animal all together).

We've always been exceedingly slow to close. We don't want to undo all of your hard work. Furthermore, we're entirely okay with sites not ever graduating.

Yep. No graduation is totally fine. The community team has believed this for some time now, but we’ve done a poor job of communicating it. If you have a small site, but its well kept and is helping people with real problems they have, you're still contributing to SE's goal of Making The Internet A Better Place (tm). Genealogy is squarely in this category. This is a great site, and we want it to keep being part of the Stack Exchange network.

Want to help Genealogy SE? Consider volunteering yourself as a moderator.

I mentioned above that getting folks to step up as a third mod has been tricky, and as a result, I just posted this meta question. If you care about Genealogy SE, we need some leadership from within -- we need you!

Unfortunately, PolyGeo, getting each measure into the green is NOT what's required to graduate. Area51 puts those statistics up as a general guideline of how your site is doing along the road to becoming self-sustaining.

According to @RobertCartaino in his answer on the Bicycles meta, all that's required to "graduate" from beta is:

We are good on all these fronts.

So then, what is required to graduate? Take a look at Robert's blog article: When Will My Site Graduate?

What Robert says there is that the graduation date of a site will depend heavily on having enough users with sufficient reputation to properly lead and govern the site. They want to ensure that the site is self-sustaining.

"Self-sustaining", in addition to having an engaged community, means a significant (90%) amount of our traffic comes from searches on search tools and causes our traffic to continue to grow. I've seen that written somewhere before and if I can find the reference, I'll add it here.

Written on What is the Stack Exchange (Staff) process of launching a site? is:

I think you, PolyGeo, along with the other moderators of this site, should approach the StackExchange gurus like Robert. You should request an evaluation of the Genealogy & Family History StackExchange site with regards to graduation, as we are now 892 days into beta. We continue to get high quality questions on our site, and they get answered.

So ask them whether or not we could start the process of graduation, and if not, what is that that we are missing and what steps should we take to be seen as worthy of graduating.

For that matter, maybe they are just waiting to hear from us. ????

Not the answer you're looking for? Browse other questions tagged discussion questions graduation votes .

7
Brainstorming solutions to grow this site?
7
Good news about our outlook -- we can stop worrying about graduation
7
Genealogy SE needs some new leadership. Is it you?

5
How can "Citation guides for family history and genealogy" be made a good question?
6
Our 2 Critical Issues: Users and Participation
4
Should we be 'targeting' user communities?
0
Should we have another publicity push?
10
How to increase our question rate?
2
Ask your ANZAC ancestry questions on 100th anniversary of Gallipoli landing!
4
Are you interested in Canadian genealogy and Family History?
7
Brainstorming solutions to grow this site?