Ads for G&FH on other SE sites

As we're not a graduated site, we can't have community promotion ads on our site at this point. What we can do is create adverts for G&FH that show up in the sidebar on other related sites in the SE network.

Let's create some ads here, and submit them to the Community Promotion Ad posts on the relevant graduated site. Ads typically need 6 upvotes before they are displayed on a site. Ads need to be 300x250 px, PNG or non-animated GIF, no more than 150 KB, and 1 px border if white background. Ads are reset annually, but there's no reason one can't be added mid-way through the year.

I think it helps to tailor the ads to the site they will appear on, rather than a generic ad. I've started one example for Biology SE to get the process going. Feel free to include designs or ideas for other sites we could advertise on. If you have an idea but no inclination to make an ad, myself or someone else may be able to make the ad. What other SE sites might it be useful to have an ad on?

Unfortunately, no Community Adds at Photography SE Meta reached 6 in their 2020 voting and so they are not part of the Community Ads initiative in 2021 - see The future of Community Promotion, Open Source, and Hot Network Questions Ads.

For Photography SE, and its 40,000 registered users. 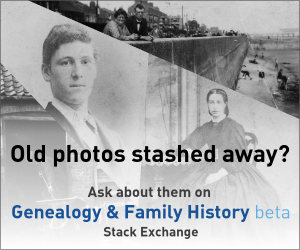 Support this ad by upvoting at: https://photo.meta.stackexchange.com/a/5465/63680
(required target is 6 upvotes)

I posted a Meta Photography SE question which seemed to entice some of their members to add the extra two votes we needed to see our ad start to appear there: https://photo.meta.stackexchange.com/questions/5506/is-photography-se-interested-in-family-history

We can see from https://photo.meta.stackexchange.com/ads/display/5360 that our community ad is attracting the most clicks per day of the 2 community ads that they display.

I don't have any artwork but a catchphrase for a G&FH SE ad on the GIS Stack Exchange, which has about 68,000 registered users, could be:

Over the past 10 or so years the GIS industry has made a concerted effort to "own" the word "where" and so it would help associate the subject matter of the two sites.

With Family HiStory Mapping being a focus of mine I would love to see more GIS Professionals taking an interest in Genealogy & Family History.

Perhaps a graphic could be a globe of the world centred on the Atlantic Ocean (so the Americas, Europe and Africa are all visible), with a few bright yellow stars at locations like New York, the Carribbean, West Africa and London, and a 19th century ship placed in the centre of the ocean, and maybe a double helix to represent DNA placed somewhere else. 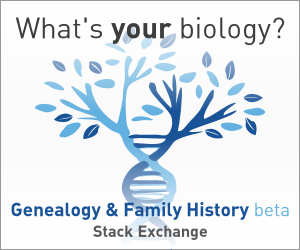 Support this ad by upvoting at: https://biology.meta.stackexchange.com/a/3689/18860
The required target for it to start being displayed is 6 upvotes and we are currently at 5 - so we need just one more!

I think we might be able to make a connection with some of the 157,000 users registered for English Language and Usage Stack Exchange around the opportunity for them to see interesting examples of palaeography and phraseology from hitherto unseen or unsurfaced documents.

Perhaps a catchphrase and graphic could be something like this in a large Old English font:

My old English grammar is not researched but hopefully you get the idea.

The same idea could be applied with lesser effect to the other graduated language site:

It is a shame that language sites like German (17K users), French (11K users), ..., Latin (1.6K users), etc have not yet graduated and therefore are not eligible to host community ads.

Not the answer you're looking for? Browse other questions tagged discussion publicity .

7
Links to other sites?
4
Should we be 'targeting' user communities?
4
How should I react to a question that "appears" to show no prior research?
5
Can I post cousin-bait on this site?
3
Promotional ads for Genealogy.SE!
5
What should our policy be on Q&A in Language Other Than English (LOTE)?
4
What makes a question (and its answers) worth sharing?
3
Problems with citing profiles from collaborative trees and other non-static websites?
6
Improving our tagging (redux)
2
Questions cross-posted from other question sites?