It has 45,000 members. Admin is Robin Foster. She has a webpage for it at www.genealogyjustask.com and it is so big, it has even formed smaller groups by Country and State and Topics.

Look at the group's stats: 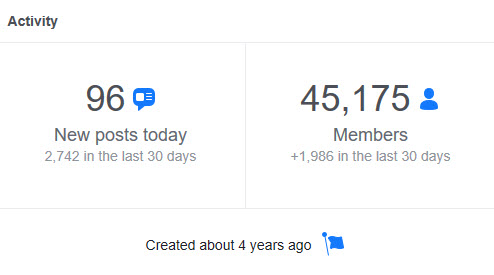 and that's just the main group. The hundred subgroups also have members and posts.

I'm not a member of any of those Facebook groups, so I can't comment on the quality of their Q's and A's.

The model of how Stackexchange works is much better for Q&A's than a Facebook group is. These questions here are permanent, peer reviewed, have quality answers, and are discoverable later via major search engines.

Is there any allowable and acceptable way that we can attract some of that traffic here?

One of the difficulties I see in getting people to come over from Facebook, especially for members of Closed Groups, is that people may not want to post here because the questions and answers are discoverable by major search engines.

No matter what the security of the actual information may be, Facebook may be perceived as a 'walled garden' or 'safe space' because Facebook allows the user to control their participation in a way that is impossible for sites like this one.

Many users in the location-based groups are posting queries of the type where they post their surnames of interest, town, etc. and ask if anyone already knows their family. They don't necessarily know how to read case studies for clues and don't understand why we ask them to show their prior research efforts. The groups are suited for the types of Qs and As that are frowned upon on this platform -- quick look-ups and one-line answers.

Another difficulty is that if someone asks a question in those groups and I share a related question here, Facebook sometimes strips out my comment because I'm linking to another site and it looks like spam to their bots. If I catch it right away, I can click on a link to say 'no, it's not spam', but if I've missed the notification because I've moved on (to admin my own groups there) then my comment is deleted.

One approach we might try is to start a Facebook Group of our own for people in the community here who are also on Facebook. It would give people on Facebook the opportunity to network with us and chat, which they can't do here, because new users don't have enough rep to start chatting right away.

There's a group on Facebook for the Family Historian software which is basically there just to be a meet-and-greet, whose real purpose is to steer people to the FHUG forum. I don't know how successful it has been -- very often people when people are on Facebook, they're unwilling to move to another platform -- they think it will take up too much time to participate in another place.

I participate in two regular Tweet chats, which I've shared on Facebook. A couple of people have followed me to Twitter, but not very many. I've had some success getting my Twitter peeps to come to this site from Twitter by sharing our questions there, but mostly they come to answer the single question of interest.

If we'd like to start a Closed Facebook group as a meet-and-greet for G&FH.SE on Facebook, I am willing to help set it up, but I need another Facebook friend to start it with me.

Not the answer you're looking for? Browse other questions tagged discussion publicity .

This site is for discussion about Genealogy & Family History Stack Exchange. You must have an account there to participate.

9
Encouraging new users through comments and refraining from swift closing/rapid/multiple down-voting
9
Coordinating Publicity
10
How to increase our question rate?
5
Can I post cousin-bait on this site?
3
Does heraldry as a general topic belong on this site?
9
It's Starting To Happen!
5
How can we encourage new users to provide more information?
5
2015: Year (okay, thirteen weeks) of the Do-Over?
3
Adding Question and My Answer from Facebook
2
DNA Surprise Questions